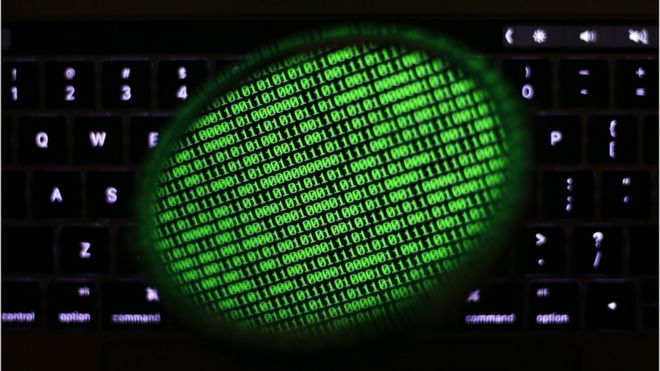 Ukraine says it has proof that Russian security services were involved in the cyber-attack that targeted businesses around the world earlier this week.

The country's security service, the SBU, said it had obtained data that points to a link with an attack on the nation's capital, Kiev, in December.

Ukrainian firms were among the first to report issues with malicious software on Tuesday, before the virus spread.

Moscow denied any involvement, adding that the allegations were "unfounded".

The virus, which disrupted IT systems across the globe, froze computers and demanded a ransom be paid in the digital currency Bitcoin, which is untraceable.

However, the attack also hit major Russian firms, leading some cyber security researchers to suggest that Moscow was not behind it.

But on Saturday, Ukraine's SBU said in a statement that - through data obtained from international anti-virus companies - it had established a connection with a previous attack involving the so-called Petya virus, which it alleges was not designed to secure ransom payments.

The malware hall of fame

How can businesses be protected?

The SBU later said the ransom demand was a cover, adding that the attack was aimed at disrupting the operations of state and private companies in Ukraine and causing political destabilisation.

The lack of any real mechanism for securing financial payments, the SBU said, led the agency to this assumption.

Ukraine appears to have been particularly badly hit in the recent attacks.

The police received about 1,000 messages on intrusions in the operations of computer networks over a 24-hour period. A total of 150 companies filed official complaints with the police.

In December, the country's financial, transport and energy systems were targeted by what investigators judged to be a cyber-attack. The incident resulted in a power cut in Kiev.

The attack earlier this week comes two months after another global ransomware assault, known as WannaCry, which caused major problems for the UK's National Health Service.

Important Information About Traveling to Russia That You Should Know